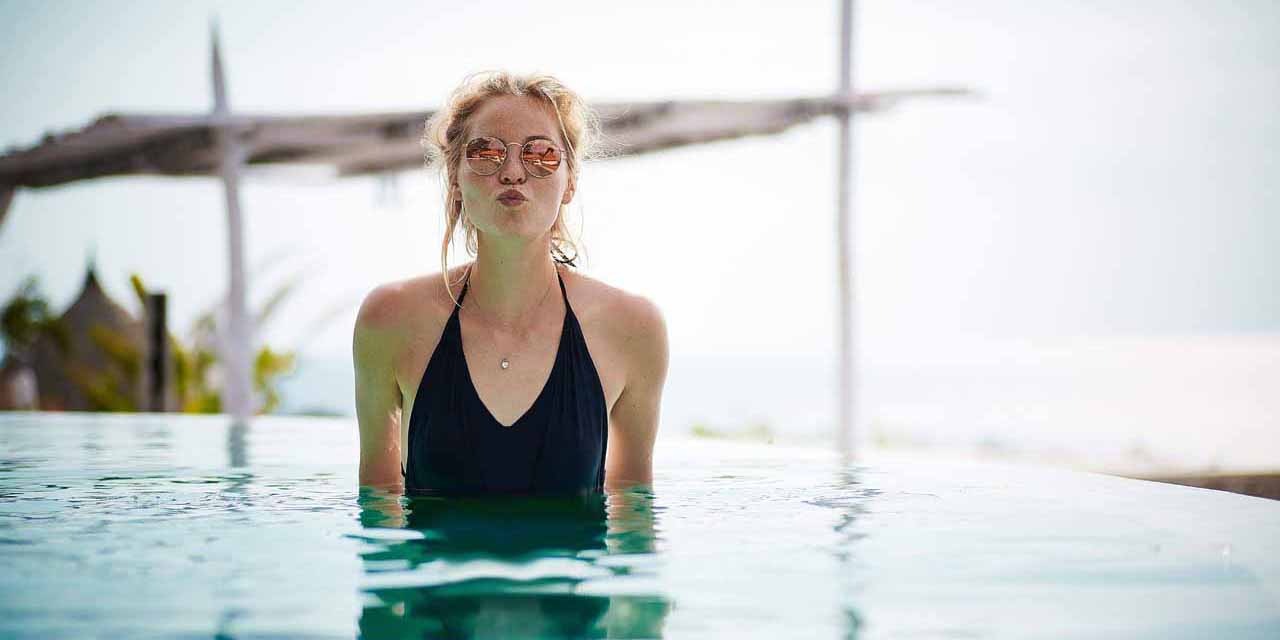 Saltwater Pool System: How Does it Work?

Have you ever wondered how a saltwater pool system works? You’re not the only one. We’re often contacted by swimming pool owners who are attracted by the significant cost savings converting to a saltwater system can bring, but want to understand the process a little better.

So, we thought we’d create this simple guide to the science behind how a saltwater pool system keeps your pool water sanitized and crystal clear.

How Does a Salt System Work in a Pool - An Overview

In simple terms, a pool salt system works by turning a low level of dissolved salt in the water into chlorine. The titanium cells contained in your saltwater system use a process called electrolysis to separate the salt and water molecules and create a pure form of chlorine. The chlorine then cleans, sanitizes, and disinfects the pool water. Eventually, the salt is regenerated; it’s not used up!

Unlike chlorine that is commonly added to swimming pools in liquid, tablet, or granular form, you don’t typically get the harsh chemical effects. Another key difference is that as chlorine is derived from salt, it’s a lot cheaper in the long run! 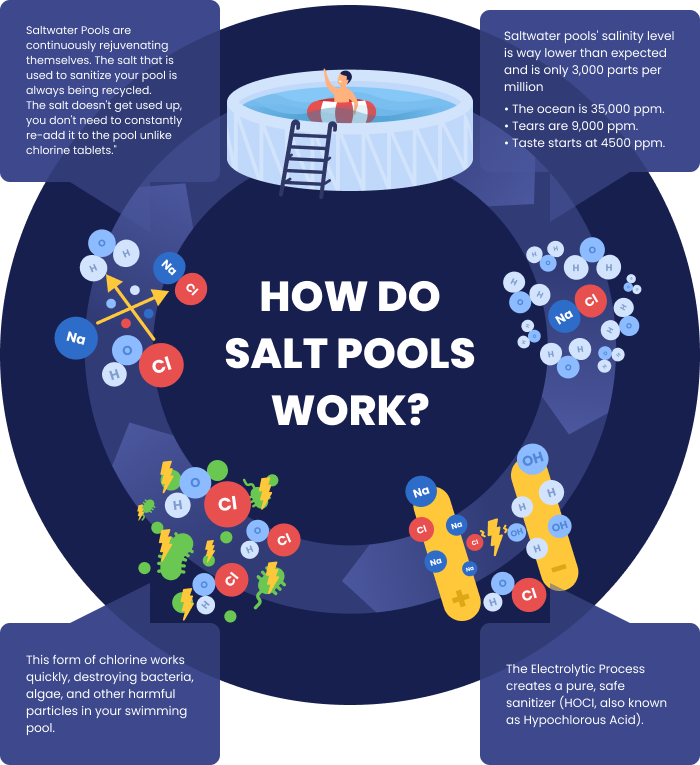 How Does a Salt System Work in a Pool - The Process

When you are installing your salt system, the first step is to add salt to the pool. The recommended method of adding the salt is to pour or broadcast it across the shallow part of your pool. Run your pump for a day or do and the salt will fully dissolve - you can brush it along the bottom of the pool to speed up the process if desired.

The amount of salt added creates such a low salinity level that for many people its virtually unnoticeable. Typical salt systems require salt levels in the pool to be between 2800 - 4200 parts per million (ppm). In comparison, salt levels in the ocean are at least 35,000 ppm. At such low levels, you should not be able to taste the salt in your pool or see it affect things.

The chemical reaction resulting from the electrolysis produces chlorine in the form of sodium hypochlorite and hypochlorous acid. These are the pure forms of chemical chlorine that are commonly used in standard chlorinated swimming pools.

One benefit of this process is that it avoids the formation of chemical byproducts like chloramines that are responsible for the caustic effects like dry skin, red eyes, bleached hair or swimsuits, and that telltale chlorine smell; that means you’ll have much nicer water quality.

The pure form of chlorine that has been produced by the process of electrolysis then enters back into the pool and disperses evenly through the water. That creates a low residual chlorine level that protects the pool water from the formation of algae and from harmful microorganisms that are in the environment or are introduced into the pool by swimmers.

Effectively, the salt system provides consistent amounts of chlorine, automatically every day. This acts as a shield by not giving any unwanted organisms the chance to grow. It destroys any germs and algae and leaves a mild residual sanitizer to keep your pool water sparkling clean.

The final stage of the process is where the real magic happens. Rather than having to be replaced, the original salt molecules that were broken apart to create chlorine eventually reform. So, rather than adding more salt to the pool, the salt you originally put in is continuously recycled. That’s why there’s no salt tank in a pool salt water system, and it’s another reason why saltwater pool systems have such a low cost of ownership.

Once the original salt molecules have reformed, the process starts all over again. The salt passes through the salt cell and is turned into chlorine that cleans your pool. The result is clear and clean pool water without the time, effort, expense, or unwanted side effects of a traditionally chlorinated pool.

Ready to Convert to a Saltwater Pool System?

Now you know how a saltwater pool system works, it’s time to convert. Take a look at our saltwater chlorinators for every pool size to get a hassle-free swimming pool experience without any harsh chemical effects.
Read more


At that size pool, you could likely take a look at most any system on this page: https://www.discountsaltpool.com/salt-water-chlorine-generators-for-small-pools

For more information about sizing and how to choose a model, take a look at this page: https://www.discountsaltpool.com/what-size-salt-pool-system-is-right-for-me